Bobby Baldwin net worth: Bobby Baldwin is a casino executive and professional poker player who has a net worth of $20 million. Bobby Baldwin has earned his net worth and made a name for himself by way of his many attention grabbing wins in the World Series of Poker tournaments. He has won a total of four bracelets and has had sixteen money finishes over the course of his poker career from between 1977 and 2010. Back in 1978, Baldwin won the $210,000 grand prize as well as the title at the WSOP world championship event, and at the time he was the youngest winner in the history of the World Series of Poker. He was only twenty eight years old at the time. He also won the Super Bowl of Poker tournaments in 1979 winning the $5000 Seven Card Stud event. In addition to his poker career, Baldwin has worked as a consultant of the Golden Nugget Casino, and later became the President of that organization. He also was the CFO of Mirage Resorts in 1999-2000 when he then became the CEO of MGM Mirage after MGM Grand and Mirage Resorts merged into one company. He also became the CEO and President of the Project City Center as well, and in that position supervises the expansion of resorts through the Mandalay Resort Group as well as the Wynn Properties company. In addition to his many projects and careers Baldwin has also written a book for poker playing beginners, entitled "Tales out of Tulsa." Mike Caro has written a book about Baldwin's poker techniques that's called "Bobby Baldwin's Winning Poker Secrets." Baldwin was born in Tulsa, Oklahoma, but now resides in the poker capitol of the world, Las Vegas. He attended college at Oklahoma State University. He has also earned himself a reputation as a fantastic billiards player. 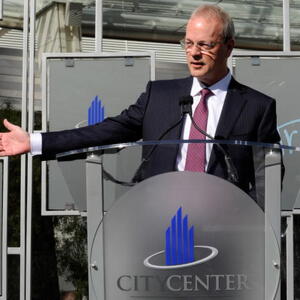