opilio crab fishing season. The adventures take place on the Bering Sea; the base of operations for the fishing boats is located in The Aleutian Islands port of Dutch Harbor, Unalaska, Alaska. The show gets its name from the inherent risk of serious injury or even death associated with this sport. Deadliest Catch made its television debut on April 12, 2005 on the Discovery Channel and is currently in its tenth season; it can be seen in over 150 countries. Bill has been on the show for five seasons and has spent over twenty years working his way up the ladder in the commercial fishing world; he is currently an extremely successful captain on the shipping vessel, Cape Caution. He has an intimidating reputation, and sometimes uses unconventional methods to keep his crew going strong. He has extensive experience as a naval engineer, boat electrician, and as a commercial fisherman. After graduating from high school in 1975, Wichrowski joined the Navy and moved to the West Coast. After four years of service, he started working on a commercial fishing boat, and has lived the lifestyle ever since. He is originally from Irwin, Pennsylvania and has two sons and a daughter. In the off-season, he and his wife, Karen Gillis, live in their home in Sonora, San Carlos, Mexico and he enjoys sport fishing, travel, horseback riding, NASCAR, and golf. He actively supports nonprofit projects including Wounded Warriors and breast cancer charities. 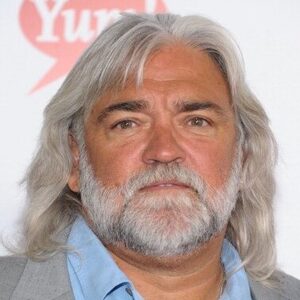