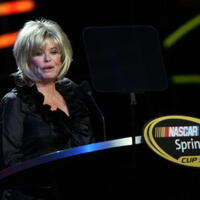 Betty Jane France Net Worth: Betty Jane France is an American businesswoman who has a net worth of $500 million. Betty Jane France was born in Winston-Salem, North Carolina. She is the Executive Vice President and Assistant Treasurer of NASCAR, Inc. France is also a Chairperson of the NASCAR Foundation. She was married to Bill France, Jr., the Chairman and CEO of NASCAR who passed away in 2007. Betty Jane's children Lesa France Kennedy is the CEO of International Speedway Corporation and her son Brian France is Chairman and CEO of NASCAR. Betty Jane is known for championing healthcare for children and helped establish the Speediatrics children's care unit at Halifax Health in Daytona Beach and Homestead Hospital in Homestead. In 2011 the Betty Jane France Humanitarian Award was created in her honor. She became chairwoman of the NASCAR Foundation in 2004. France is also a member of the Junior League of Daytona Beach and has served with the American Red Cross and the Garden Club of Halifax County. She received the Halifax Medical Center Foundation's Humanitarian Award in 2003.