Angie Carlson net worth: Angie Carlson is a businesswoman and reality show personality who has a net worth of $5 million dollars. Based in Sturgis, South Dakota, Angie Carlson is the Marketing Director for the Full Throttle Saloon. Full Throttle has the distinction of being the largest biker bar in the world. The bar, which is located in Sturgis, South Dakota, is owned by Angie's husband Michael Ballard. Michael bought the land for the bar in 1999 and has since grown it into an almost circus like destination. The bar has multiple stages, a tattoo parlor, zip line and parking for thousands upon thousands of motorcycles. At the peak of the annual Sturgis Motorcycle rally, as many as 300,000 people visit the saloon. The bar has been known to have 20,000 visitors per night on its most busy days of the year. In addition to working as Full Throttle's Marketing Director, Angie Carlson also runs her own section of the saloon, called "Angieland". People who visit the bar can have their pictures taken with her butt, which is supposedly the most photographed rear-end on the planet. Angie also dances with the in-house dance group, Flaunt. She married Full Throttle's owner, Mike Ballard in August 2012. The Full Throttle Saloon is the subject of the truTV reality series, "Full Throttle Saloon", which follows the staff of Full Throttle as they prepare for, and then serve, all of the people who participate in the Rally each August. The show has aired 41 episodes across five seasons since debuting in November 2009. In 2013, Angie and Michael opened a distillery in Michael's hometown of Trimble, Tennessee. The distillery has since become a popular tourist attraction. 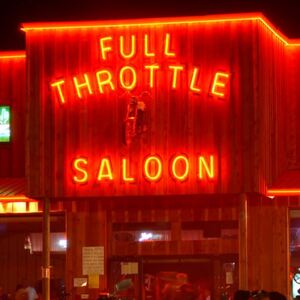