Angela Ahrendts net worth: Angela Ahrendts is an American businesswoman who has a net worth of $210 million. Angela Ahrendts was born in New Palestine, Indiana in June 1960. Ahrendts graduated with a Merchandising and Marketing degree from Ball State University. She moved to New York City, New York to work in the fashion industry where she joined Donna Karan International in 1989.

She was hired at Henri Bendel in 1996 and became Vice President of Corporate Merchandising and Design at Fifth & Pacific Companies in 1998. Ahrendts was promoted to Senior Vice President Corporate Merchandising and Group President in 2001. She was promoted to Executive Vice President in 2002. In 2006 she joined Burberry as CEO. During her time the company's value rose by over $5 billion Pounds. In 2012 Ahrendts was the highest paid CEO in the United Kingdom and earned $26.3 million. In 2014 she joined Apple Inc. as Senior Vice President of Retail and Online Stores. In 2015 it was reported that she earns more than Apple CEO Tim Cook at $70 million. Ahrendts has been named to many lists of most powerful women in the world. 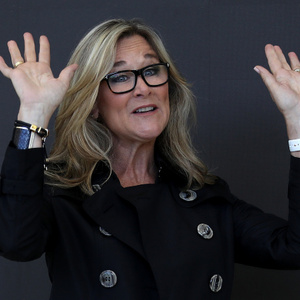