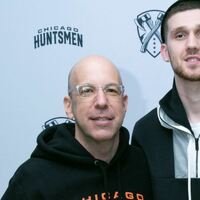 Andy Miller net worth: Andy Miller is an American businessman and entrepreneur who has a net worth of $400 million. He is best known for being the co-owner of the NBA's Sacramento Kings.

Andy Miller was born in Boston, Massachusetts in December 1968. He graduated from Union College and earned his JD from Boston College. Miller worked for a law firm and then served as the Senior Vice President for Business Development at Verisign from 2003 to 2006. He co-founded Quattro Wireless in 2006 and sold the company to Apple for $275 million in 2009. Miller served as a partner with Highland Capital Partners from 2011 to 2014. He served as president and chief operation officer for Leap Motion before creating the startup Remix Media Inc. Andy Miller co-founded the professional video game esports team NRG Esports in 2015. He is also the co-owner of the minor league baseball team the Modesto Nuts.