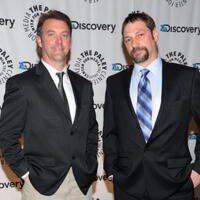 Andy Hillstrand net worth: Andy Hillstrand's is an Alaskan commercial fishing vessel captain who has a net worth is $1.5 million dollars. Born in Alaska as a third generation Alaskan fisherman, Andy is the co-captain of the Time Bandit, one of the boats featured on the popular Discovery Channel series, Deadliest Catch. Andy began appearing on the show with his brother, Jonathan Hillstrand, during the show's second season, and the Time Bandit was initially used as a chase boat to get extra footage of the other boats featured on the show. The Time Bandit crew also includes Neil Hillstrand, Scott Hillstrand (Johnathan's son), Axel Hillstrand (Neil's son), Eddie Uwekoolani, Jr, Eddie's son, Eddie Jr, Nick Tokman, and William Aaron. The show is known for showcasing the dangers and personal trials of the crew, and is shot with handheld cameras by a two-person camera crew that lives on each boat for the duration of the various crab seasons. Andy is known as the more level-headed of the captains and he takes every aspect of being a professional fisherman very seriously. He is a devoted family man who has been married to his wife Sabrina for over 26 years and has two grown daughters, Chelsey and CassAndra. When he is not fishing, Andy enjoys living on his 17-acre ranch in Indiana where he and his wife operate their other business, Hobby Horse Acres. When Season 6 filming was coming to an end, Hillstrand and other captains featured on the Deadliest Catch were sued by the Discovery Channel in a $3 million lawsuit which almost made them quit the show, meaning they would not be featured in Season 7. The men were concerned at the time of the lawsuit because they were under the impression that the Discovery Channel had filmed everything they needed, but the television executives said they still needed pickup shots. Adding additional filming at this time would have negatively effect the schedules of the fishing vessels and the men put fishing first. In the end, the Discovery Channel and the captains of Time Bandit and Northwestern ended up reaching a deal, and the crews returned to the show; after the death of Captain Phil Harris, the Captain of the Cornelia Marie, the show would not have survived another drastic casting change.