Andrew Modlin net worth: Andrew Modlin is an American artist and businessman who has a net worth of $50 million. He is best known for being a big player in the legal marijuana industry thanks to the company he co-founded, MedMen.

Andrew Modlin was born in Los Angeles, California in March 1987. He graduated from Harvard Westlake High School in 2005 then attended UCLA School of Art and Architecture. In 2010 he co-founded MedMen with Adam Bierman. The company provides turnkey services for licensed cannabis operators and raises capital in strategic markets. The company has helped more than 100 businesses enter the legal marijuana market. Modlin and Bierman were featured in Time magazine in April 2015. Andrew Modlin became the President of MedMen in 2010. MedMen has locations in six states including New York, California, and Florida.

Real Estate: He purchased a $3.9 million home in Hollywood in 2019. He sold this home a year later to YouTuber Emma Chamberlain in 2020, for a roughly $5,000 profit. In July 2019 Andrew bought a home in the Hollywood Hills for $11 million. Nearby neighbors include Keanu Reeves and Leonardo DiCaprio.

Controversy: Modlin and Bierman have come under fire for spending lavishly on unnecessary expenses while their company's finances were allegedly not fully secure. For example at one point they were allegedly spending $4 million per year on personal security for themselves, much more than Facebook spends on Mark Zuckerberg or Apple spends on Tim Cook. In early 2019 Modlin and Bierman were sued by a group of investors. The lawsuit claimed the duo engaged in "rampant, brazen self-dealing". Around this time a former employee claimed that Bierman, with Modlin's help, falsified his personal brokerage statement to apply for a home mortgage. The former employee also claimed that Modlin used company funds to buy furniture for his personal home. 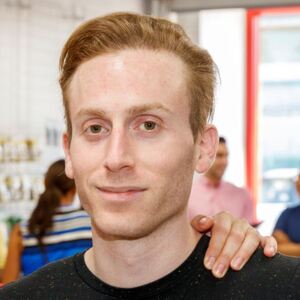