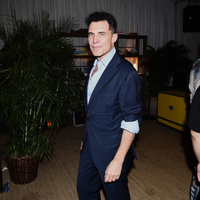 Andre Balazs net worth: Andre Balázs is a New York City hotelier and residential developer who has a net worth of $800 million dollars. Andre Balazs has built his net worth as owner of seven hotels in New York, Miami and Los Angeles. His hotels include Chateau Marmont, The Mercer, Sunset Beach, and the Standard Hotels which have locations in Downtown LA, West Hollywood, Miami, and New York.

Early Life: André Tomes Balazs was born in Boston, Massachusetts on January 31, 1957. His father was a professor at Harvard's medical school and later the director of opthamalic research at Columbia-Presbyterian Medical Center in New York. Andre studied humanities at Cornell University as a College Scholar, then received a masters degree at a joint journalism and business program at Columbia University.

In 1988 André and his father co-founded a company called Biomatrix which eventually developed several skin and eye care products. In 2000 they sold Biomatrix to Genzyme for $738 million.

Hotels: Starting in the late 1980s, André began investing in various nightclubs and restaurants in New York and Los Angeles. In 1989 he purchased New York's Mercer Hotel in SoHo. In 1990 he acquired LA's famed Chateau Marmont for $12 million. Over time his portfolio of hotels would grow to include some of the most beloved, high-end boutique hotels around the globe including Chiltern Firehouse in London and The Standard which today has six locations. He sold 80% of The Standard in 2013.

Personal Life: Between 1985 and 2004 he was married to Katie Ford, founder of Ford Models. Together they have two daughters. He was romantically linked to actress Uma Thurman and potentially even engaged at some point between 2004 and 3007. In 2017, Andre welcomed a child with socialite Cosima Vesey.