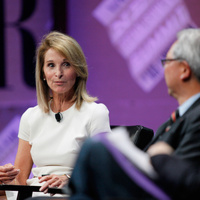 Amanda Burden net worth: Amanda Burden is an American businesswoman who has a net worth of $200 million. Amanda Burden was born in New York City, New York in January 1944. She graduated from Sarah Lawrence College and earned her MUP from Columbia University. Burden is a Principal at the international consulting service Bloomberg Associates. She served as a director of the New York City Department of City Planning as well as the Chair of the City Planning Commission from 2002 to 2013 under Mayor Michael Bloomberg. Burden also worked for the New York State Urban Development Corporation and worked on Battery Park City. She is a regular member of the International Best Dressed List. Amanda Burden has been married twice including to Steven J. Ross and was a partner of Charlie Rose from 1993 to 2006. Her mother was socialite Babe Paley who was married to the heir of the Standard Oil fortune and the founder of CBS.