Álvaro Noboa Net Worth: Álvaro Noboa is an Ecuadorian businessman and politician who has a net worth of $1 billion. Born on November 21, 1950, in Guayaquil, Ecuador, he made his money in real estate before taking control of his father's company, and eventually getting himself actively involved in politics. The son of one of Ecuador's richest plantation owners, Noboa had the chance to educate himself in the best schools.

After he finished school at La Salle School in Guayaquil, he went to Le Rosey in Switzerland, achieving at both the standard of best student. Next, he took a lawyer's degree from the University of Guayaquil and undertook graduate studies in Management at the American Management Association in New York. In 1973, Noboa set up a firm that unites several real estate companies called Promandato Global S.A. As such, it is one of the largest firms in Ecuador. In the late 1980's, he went on to establish a monthly magazine (Revista La Verdad) and other investment companies on an international scale (Global Financing Company), as well as he founded one of the most reliable Ecuador's banks (Banco del Litoral). In 1997, he took over the stock and corporate control of his father's companies and also he has been already managing 110 companies in Ecuador and the world (Europe, Japan, New Zealand, United States, Argentina) all of them established through his own initiative. Meanwhile, he acquired the presidency over the Ecuadorian Monetary Board, and in less than six months, achieved the highest monetary reserve in the history of the country with more than two billion dollars, an amount never before achieved. What's more, he is the Founding President of the Realtors Association, of which he is now Honorary Life President. Representing his political party, Noboa unsuccessfully ran for the office of President of Ecuador in 1998, 2002, 2006, and 2009. However, he was elected national assemblyman in 2007 and he decided to be running for a fifth time to become the President of Ecuador in the upcoming 2013 Ecuadorian Presidential Elections. 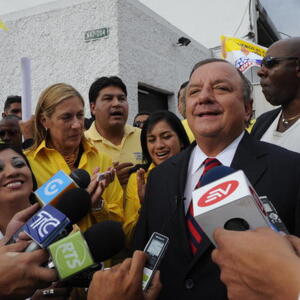