He started off as Executive Manager of Tubacex S.A. from 1965 to 1980 and then became Deputy Manager for Banco de Vizcaya from 1981 to 1983. Abad next was CEO and Chairman of Banca Catalana from 1983 to 1988 and then served as CEO and Chairman of Banco Bilbao Vizcaya from 1988 to 1993. From 1993 to 2002 he worked as Chairman for Banco Espanol de Credito and then as First Deputy Chairman for Inmobilaria Urbis S.A. from 1998 to 2002. Alfredo joined Banco Santander as a board member in 1994. He served as Vice Chairman and CEO from 2002 until 2013 when he resigned as CEO before the Bank of Spain had to make a ruling. He has also lectured at the University of Duesto and been part of the International Academy of Management and the European Advisory Council of Air Products & Chemicals. Abad won the Spanish government's Gold Medal in 1998. In 2012 he was reported to have earned $10.6 million pounds as Santander's top earner. 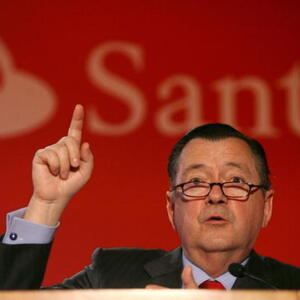