Alan Shepard net worth: Alan Shepard was an American astronaut, naval aviator, test pilot, and businessman who had a net worth of $50 million at the time of his death in 1998. He was best known for being the first American to travel into space and for walking on the moon. Later in life he earned a fortune in the corporate world, serving on the boards of many companies. He was also an entrepreneur and highly successful real estate investor.

Alan Shepard was born in Derry, New Hampshire in November 1923 and passed away in July 1998. He graduated from the United States Naval Academy and the Naval War College. He saw action with the Navy during World War II. Shepard was one of the original NASA Mercury Seven astronauts in 1959 and made the first crewed Project Mercury flight Mercury-Redstone 3 in 1961. He named the spacecraft Freedom 7. Alan Shepard was the second person and first American to travel into space and the first to manually control the orientation of the craft. He commanded the Apollo 14 mission in 1971. At 47 years old he became the oldest and earliest born person to walk on the Moon. He hit two golf balls while on the lunar surface. Shepard served as Chief of the Astronaut Office from 1963 to 1969 and from 1971 until he retired in 1974.

After retiring from the Navy and NASA in 1974 Alan became the chairman of the Houston-based Marathon Construction Company. He then founded his own company, Seven Fourteen Enterprises, so-named as a reference to his two space missions, Freedom 7 and Apollo 14. 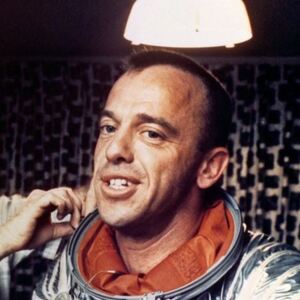