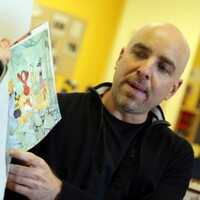 Brad Keywell net worth: Brad Keywell is an American entrepreneur who has a net worth of $600 million. Brad Keywell acquired that net worth as co-founder and CEO of the technology firm called MediaBank LLC and as one of the founders of Groupon. MediaBank specializes in providing operations systems for media and advertising companies. Keywell was born in Detroit, Michigan in October 1969. He graduated from the University of Michigan and earned his Juris Doctor cum laude from the University of Michigan Law School in 1993. He co-founded Starbelly in 1999, which is an online promotional product supply chain management technology firm. In 2005 he co-founded Echo Global Logistics. In 2006 he co-founded MediaBank. In 2007 he co-founded ThePoint.com. In 2008 the site name was changed to Groupon and the company went public in 2011. In 2010 he co-founded Lightbank. In 2012 Keywell co-founded Mediaocean. He also serves as an Adjust Professor at the Booth School of Business at the University of Chicago. He has authored two books. Keywell is the Chairman of the Illinois Innovation Council and the founder and Chairman of Chicago Ideas Week and the Future Founders Foundation. He is a frequent speaker at technology and marketing industry evens and a guest lecturer. In 2013 Groupon had 10,000 employees and made more than $2.5 billion in revenue.