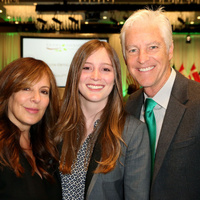 Bill Guthy Net Worth: Bill Guthy is an American businessman who has a net worth of $600 million dollars. Bill Guthy is best known as the co-founder of Guthy-Renker. Always an entrepreneur at heart, Guthy turned his knowledge of distribution, gained from owning and operating his own cassette duplication business, into a hugely successful fulfillment services business when he teamed up with Greg Renker in 1981. Their focus soon turned to new product and brand development, including selecting, licensing and developing products that met the direct response criteria for success. One of their key early strategies involved casting talent that had an associated product story rather than using a traditional endorsement. Guthy-Renker has partnered with many celebrities as well as physicians over the years to launch their skin and hair care products (Victoria Principal, Cindy Crawford, Dr. Perricone, etc.). Today, Guthy-Renker employs around 650 people and has more than 400,000 square feet of fulfillment distribution and call center space, with locations in California, Louisiana and North Carolina. Guthy has been spotlighted in Fortune Magazine on its list of America's Smartest Young Entrepreneurs and has been honored as one of Inc. Magazine's Entrepreneurs of the Year (2013). Other honors include being recognized, along with partner Greg Renker, by Goldman Sachs as two of the 100 Most Intriguing Entrepreneurs during the 2013 Innovators Summit. Guthy graduated from Ambassador College (Pasadena, California) in 1977.

Bill and his wife Victoria have two children. One of their children Jackson Guthy is a musician who gained some notoriety in 2019 for being the boyfriend of disgraced YouTube star Olivia Jade Giannulli, daughter of college cheaters Lori Loughlin and Mossimo Giannulli. In the wake of scandal, Olivia reportedly refused to speak or live with her parents and chose to hide out at Jackson's family estate in Malibu.