How much is Andrew Breitbart Worth?

Andrew Breitbart is an American publisher, commentator for the Washington Times, author, an occasional guest commentator on various news programs and has a net worth of $9.5 million. Andrew Breitbart earned his net worth as an American publisher and author. He is the adopted son of Gerald and Arlene Breitbart, a restaurant owner and banker respectively, and grew up in a family with secular liberal views, in upscale Brentwood, Los Angeles. He was raised Jewish. His birth certificate indicates his biological father was a folk singer, and that he is ethnically Irish by birth. He earned a B.A. in American studies from Tulane University in 1991. He has appeared as a commentator on Real Time with Bill Maher and Dennis Miller. In 2004 he was a guest commentator on Fox News Channel's morning show and frequently appears as a guest panelist on Fox News's late night program, Red Eye w/ Greg Gutfeld. On October 22, 2009, he appeared on the C-SPAN program Washington Journal. In February 2010 he received the Reed Irvine Accuracy in Media Award during the Conservative Political Action Conference in Washington, D.C. He often appears as a speaker at Tea Party movement events across the U.S. He has launched a number of websites, including Breitbart.com, BigHollywood.com, BigGovernment.com, BigJournalism.com, and BigPeace.com. In 2008 he launched the website "Big Hollywood," a "group blog" driven by some who work within Los Angeles, featuring contributions from a variety of writers, including politically conservative entertainment-industry professionals. In April 2011 Grand Central Publishing released his book, Righteous Indignation: Excuse Me While I Save the World, in which he discusses his own political evolution and the part he took in the rise of new media, most notably at the Drudge Report and The Huffington Post. Andrew Breitbart was born on February 1, 1969 in Los Angeles, California. 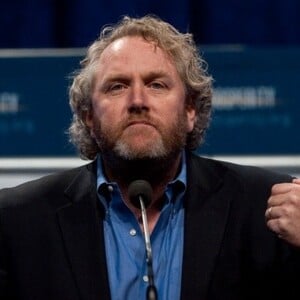