Alisher Usmanov net worth: Alisher Usmanov is an Uzbek-born Russian businessman who has a net worth of $16 billion. Alisher Usmanov has earned his net worth from mining, lumber and various other investments. Usmanov is the majority shareholder of the Russian industrial conglomerate Metalloinvest, which he founded to manage Gazprom's metals interests.

He was born in Chust, Namangan Province, Uzbek SSR; USSR on September 9, 1953, Alisher's father was a state prosecutor in Tashkent the capital of the Soviet republic. In the 2011 edition of Forbes magazine Usmanov also referred to as the oligarch is one of Russia's richest men, his estimated fortune is valued at US$17.7 billion, and making him the world's 35th richest person He is a graduate of Moscow State Institute of International Relations. In 1992 he married Irina Viner, a top rhythmic gymnastics coach. He has a vast variety of business interests including precious metals, iron ore, steel, natural gas and media companies. He also serves as chairman of Gazprominvestholdings, the investment holding subsidiary of Russia's state-owned gas company Gazprom, where his role is to manage what Gazprom calls it's "most difficult and sensitive financial transactions." Usmanov has business interest in football; he is a major shareholder in London's Arsenal Football Club. This similar to two other fellow Russians Roman Abramovich, owner of rival Chelsea, and Alexandre Gayamak, former owner of Portsmouth. Metalloinvest became a sponsor of Dinamo Moscow, in February 2008. Dinamo Moscow is the Russian capital's football team once funded by the Soviet secret service. As a part of the $7 million deal the Metalloinvest group's name replaced the Xerox Corporation's on its players' shirts. Usmanov is a ballet fan, however he does not have any shares in the Moscow club, but he is a member on the board. Usmanov is the sole owner a global conglomerate with main investments in mining and steel industry, called Gallagher Holdings. This Cyrus-registered company also has investments in technology, oil and gas, media and pharmaceuticals.

Net Worth details: Alisher Usmanov owns 48 percent of USM Holdings. In 2014 he sold 12 percent of the company, which has interests in technology, mining, and telecommunications. He acquired MegaFon for $3 billion in 2012 and then pledged 56.1 percent to Sberbank as collateral for a line of credit. He is a 30 percent owner of the Arsenal soccer team and also controls media investments through Kommersant Holding. 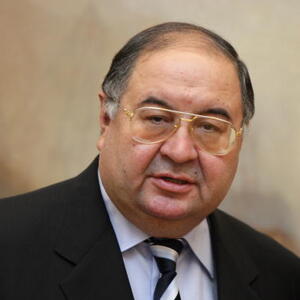