How much is Yuvraj Singh Worth?

Yuvraj Singh net worth: Yuvraj Singh is an Indian international cricketer who has a net worth of $50 million dollars. Born December 12, 1981 in Chandigarh, India, Yuvraj Singh is an all-rounder who bats left-handed in the middle-order and bowls slow left-arm orthodox. The son of former Indian fast bowler and Punjabi actor Yograj Singh, Yuvraj has been a member of the Indian cricket team in ODIs since 2000. He played his first Test match in 2003. In 2011, Yuvraj was diagnosed with a cancerous tumor in his left lung and underwent chemotherapy treatment in Boston and Indianapolis. He was discharged from the hospital in March 2012 and returned to India in April 2012, making an international comeback in a Twenty20 match in September of the same year against New Zealand, shortly before the 2012 World Twenty20. Yuvraj received the Arjuna Award in 2012, India's second highest sporting award, which was awarded to him by the President of India, Pranab Mukherjee. In 2014, he was awarded the Padma Shri, India's fourth highest civilian honor. His commercial industry endorsements include being signed by Microsoft to be a brand ambassador for the Xbox 360 video game console when it was launched in 2006 as well as being the brand ambassador for Puma. 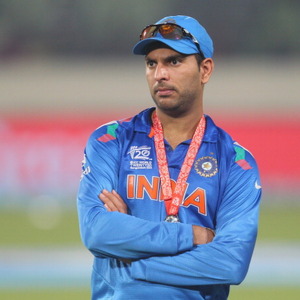