The Undertaker Net Worth

in Richest Athletes › Wrestlers
The Undertaker Net Worth:
$17 Million

What is The Undertaker's net worth?

Mark William Calaway was born on March 24, 1965, in Houston, Texas. He is the youngest of five sons. He played on the football and basketball teams at Waltrip High School. He attended Angelina College in Lufkin, Texas, about 115 miles northeast of Houston. He went to college on a basketball scholarship in 1983. He transferred to Texas Wesleyan University in 1985 to play basketball and major in sports management. He dropped out of college in 1986 and considered playing pro basketball in Europe briefly, but ultimately decided to turn his focus to wrestling.

Calaway made his pro wrestling debut for the World Class Championship Wrestling on June 26, 1987, as Texas Red. In 1988, Calaway joined the Continental Wrestling Association and wrestled under several personalities including The Master of Pain and The Punisher. He signed with World Championship Wrestling in 1989 as "Mean Mark Callous" but changed his name to "The Undertaker" when he joined the WWE in 1990. The Undertaker became one of the most popular characters in wrestling. The Undertaker is best known for "The Streak," a string of 21 straight victories at WWE's "WrestleMania." He is 25-2 overall in "WrestleMania." 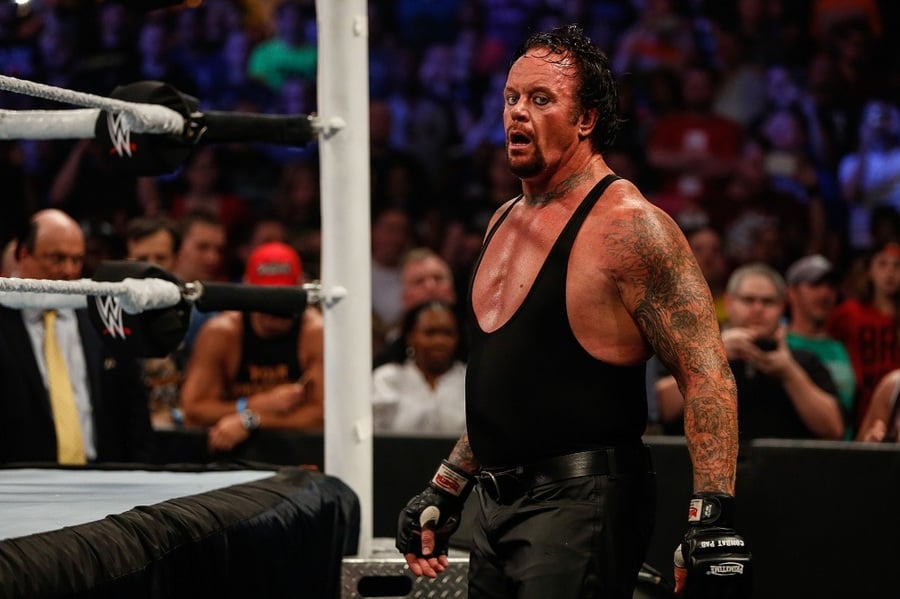 Calaway made his film debut as Hutch in the 1991 film "Suburban Commando." He had guest roles on "Poltergeist: The Legacy" and "Celebrity Deathmatch." In 2002, Calaway appeared out of character on the Canadian sports show "Off the Record with Michael Landsberg."

Calaway's WWE character has been included in numerous WWE video games, beginning with WWF Super WrestleMania (1992) and lastly in WWE 2K20 (2019). A special Undertaker-themed version of WWE 2K14 was released in 2013.

In the summer of 2020, The Undertaker, now 55, was challenged to a "Loser Leaves WWE" match by AJ Styles at SummerSlam. Styles is the current Intercontinental Champ but recently lost to Calaway. He wants a rematch in August. He said: "I'm the IC champ. Undertaker's never been the IC champ. I'll put it on the line against you and if you can friggin beat me, I'll leave the WWE forever. But if I win, you leave. There, there's the story behind that one." Technically The Undertaker is retired, but he and Styles had words.

Calaway was married to his first wife between 1989 and 1999 and they had a son, born in 1993. Calaway married his second wife, Sara, in 2000. In 2001, Sara made televised appearances with the WWE as part of a feud between Calaway and Diamond Dallas Page, in which she was acknowledged as Calaway's wife. The couple had two daughters together before divorcing in 2007. In 2010, he married former wrestler Michelle McCool and the couple's first child was born in 2012.

Calaway is an avid boxing fan and enjoys mixed martial arts. He has a black belt in Brazilian jiu-jitsu.

He is active in the charity he formed with his ex-wife Sara called "The Zeus Compton Calaway Save the Animals Fund" which helps pay for lifesaving treatments for large-breed dogs.

Calaway and his wife live in a mansion in  Austin, Texas. 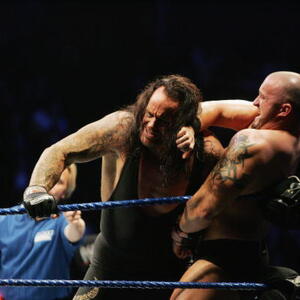