Sgt. Slaughter net worth: Sgt. Slaughter is an American professional wrestler who has a net worth of $250 thousand. Sgt. Slaughter was born in Detroit, Michigan in August 1948. He has wrestled in the World Wrestling Federation, National Wrestling Alliance, and American Wrestling Association. Slaughter held the WWF Championship and was a two time NWA United States Heavyweight Champion.

He headlined WrestleMania VII against Hulk Hogan. He won the NWA World Tag Team Championship with Don Kernodle and wrestled with a mask under the name Super Destroyer Mark II in the AWA. He signed with the WWF in 1980 and wrestled until 1984 when he joined the AWA through 1990. Slaughter returned to the WWF from 1990 to 1993. From 1997 to 2001 Slaughter made sporadic WWF appearances including as commissioner. Since 2005 he has been with the WWE as an ambassador. Sgt. Slaughter was inducted into the WWE Hall of Fame in 2004. 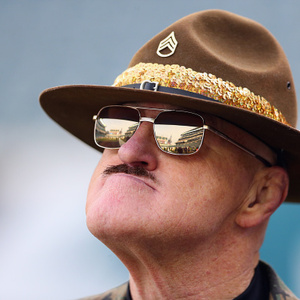