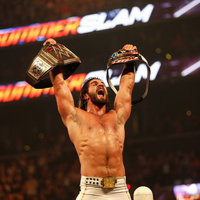 Seth Rollins net worth: Seth Rollins is an American professional wrestler who has a net worth of $9 million. Seth Rollins was born in Buffalo, Iowa in May 1986. He is the current WWE World Heavyweight Champion. He started his wrestling career under the name Gixx in Scott County Wrestling in 2003. Rollins joined NWA Midwest and made a brief appearance in Total Nonstop Action (TNA) Wrestling. He competed in Full Impact Pro and Pro Wrestling Guerrilla wrestling. Rolls joined Ring of Honor in 2007 under the name Tyler Black. He was a ROH World Champion and two time ROH World Tag Team Champion. In 2010 Rollins signed a developmental contract with World Wrestling Entertainment and started out at Florida Championship Wrestling. He won the FCW Heavyweight Championship, FCW Florida Tag Team Championship, and FCW 15 Championship. Rollins made his WWE debut as part of The Shield in 2012. He later became a part of The Authority and won the Money in the Bank ladder match in 2014. Rollins won the WWE World Heavyweight Championship at WrestleMania in 2015. He has also held the WWE Tag Team Championship with Roman Reigns and the NXT Championship.