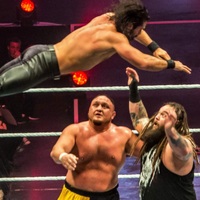 Samoa Joe net worth: Samoa Joe is an American professional wrestler who has a net worth of $3 million. Samoa Joe was born in Orange County, California in March 1979. He made his professional wrestling debut in 1999 after being trained by Cincinnati Red and Johnny Hemp. Samoa Joe competed in Ultimate Pro Wrestling from 2000 to 2001 and for Pro Wrestling Zero-One from 2001 to 2002. He competed in Ring of Honor from 2002 to 2008 and also on the independent circuit from 2003 to 2014. Samoa Joe wrestled for Total Nonstop Action Wrestling (TNA) from 2005 to 2015. He has also wrestled for AAA and Pro Wrestling Noah. Samoa Joe joined the WWE in 2015 in NXT and joined the WWE main roster in 2017. He has held the NXT Championship twice and the WWE United States Championship. Samoa Joe was the TNA World Heavyweight Champion, TNA Television Champion, TNA World Tag Team Champion twice, and TNA X Division Champion five times. He was also the ROH World Champion and ROH Pure Champion.