Pat Patterson net worth: Pat Patterson was a Canadian-American businessman and former professional wrestler who had a net worth of $10 million at the time of his death in 2020. Patterson was known for being the first ever WWF Intercontinental Champion. He was a consultant for the WWE and has been described as Vince McMahon's right-hand man.

Pat Patterson was born Pierre Clermont in Montreal, Quebec, Canada on January 19, 1941. He began training to wrestle when he was 14 years old. He made his wrestling debut in 1958, when he was 17. In his first few years wrestling he performed as "Killer Pat Patterson".

In 1962 Pat moved to the United States to pursue a professional wrestling career full-time. At this point in his life he only spoke his native French. He was soon recruited to join Pacific Northwest Wrestling, followed by Big Time Wrestling, then Champion Wrestling from Florida and a series of other regional associations. He joined the World Wrestling Federation in 1979 and would go on to stay with the organization – eventually renamed WWE – for the rest of his life.

He was the very first WWF Intercontinental Champion. He held the WWF North American Heavyweight Championship and the WWF Hardcore Championship. Pat was inducted into the WWF Hall of Fame in 1996. Patterson is credited with inventing the Royal Rumble match.

Patterson was openly gay, having come out in the early 1970s. He and his partner Louie Dondero were together for 40 years until Dondero's death in 1998. In 2016 he authored the book "Accepted: How the First Gay Superstar Changed WWE". 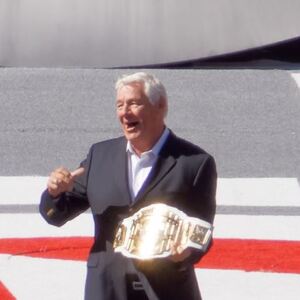