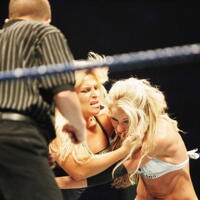 Nattie Neidhart net worth: Nattie Neidhart is a Canadian professional wrestler and model who has a net worth of $2 million dollars. Nattie Neidhart, whose full name is Natalie Katherine Neidhart, and as sometimes also known as Natalya, was born on May 27, 1982 in Calgary, Alberta, Canada. Neidhart is the first third-generation female wrestler in the world She is a member of the Hart wrestling family. Her father is wrestler Jim "The Anvil" Neidhart and her mother is Ellie Hart, who is the daughter of Stu Hart. She trained in the Hart family Dungeon under the tutelage of her uncles Ross and Bruce Hart. She is the first and only female who has ever graduated from the Hart Family Dungeon program. In addition to training in wrestling, she also trained in mixed martial arts. She began her wrestling career in Canada as part of her family's company, Stampede Wrestling in 2003, and then began touring internationally in 2004. She signed a deal with World Wrestling Entertainment in 2007, and wrestled on their development circuit for one year, appearing in matches in Florida. She began wrestling for WWE on the main roster in 2008. She went on to fight for both the WWE and ECW. She is currently appearing on the E! channel reality series, "Total Divas", about female wrestlers.