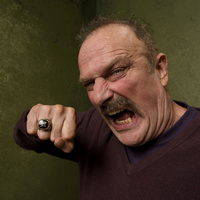 Jake Roberts net worth: Jake Roberts is a retired American professional wrestler who has a net worth of $500 thousand. Jake Roberts was born in Gainesville, Texas, and began his career in wrestling in the mid-70s in Louisiana. After wrestling as part of multiple mid-Western circuits, he graduated to the World Wrestling Federation in 1986. He was nicknamed "The Snake", as he often carried a python named Damien into the ring with him. Damien became important to many of his storylines. His first pay-per-view event featured the snake, and helped put the wrestler on the map. He is widely considered to be the inventor of the DDT maneuver, which involves trapping an opponent in a front facelock, and then falling backward onto the mat, so that the opponent's head is driven into the mat. He wrestled successfully with the WWF through 1992, and then wrestled briefly for World Championship Wrestling and on the AAA Mexican wrestling circuit. He returned to the WWF for one season in 1996, and then went on to appear in match-ups with multiple circuits. He retired in 2011, but is currently working on getting back in shape, and kicking a drug and alcohol habit.