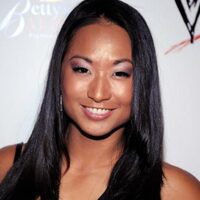 Gail Kim net worth: Gail Kim is a Canadian professional wrestler and model who has a net worth of $800 thousand. Gail Kim has earned her net worth from her active and successful wrestling career with Total Nonstop Action Wrestling (TNA) and the World Wrestling Entertainment (WWE). Kim was born on February 20, 1977 in Toronto, Ontario, Canada she is of Korean descent, she studied Kinesiology, also known as human kinetics at the University of Toronto than transferred to Ryerson University where she switched her major to nutrition. Before her wrestling career started with the WWE, Gail received breast augmentation surgery, later after signing with the WWE she had her implant enlarged. During her career with the WWE she was sideline for two-weeks due to an injury she received during a performance which resulted in one of her implants rupturing. She met celebrity chef Robert Irvine on the set of Dinner: Impossible, the couple later married on May 10, 2012. As a member of the WWE she won the Women's Championship in her first match, prior she was known on the Canadian independent circuit as La Felina. In 2004 Kim was released by the WWE and signed with TNA in September 2005. She became a member of the tag team America's Most Wanted as the team's valet. In October 2007 she became the inaugural TNA Women's Knockout Champion.