What is Dave Bautista's Net Worth and Salary?

David Michael Bautista Jr. was born on January 18th of 1969 in a suburb of Washington, D.C. His parents are of Greek and Filipino descent. Bautista later stated that he grew up in a rough neighborhood and that murders used to occur regularly right outside of his house. He also spoke about the financial hardships his family went through when he was young. Soon enough, Bautista was living a life of crime. At the age of 13, he became a car thief and later moved away from his parents to pursue a career as a criminal.

He later found work as a bouncer for a nightclub, although things went awry when he severely injured two patrons in a fight. Bautista was arrested and charged as a result of the incident. Before getting into wrestling, Bautista worked as a lifeguard. He later started bodybuilding.

Before wrestling professionally, Bautista learned his trade at the Wild Samoan Training Center wrestling school in 1999. Although he went into professional wrestling soon thereafter, he later trained again in the arts of Muay Thai, Eskrima, and Jiu-Jitsu. In regards to the latter, he trained under Cesar Gracie.

Although Bautista signed with WWF in the year 2000, he started off in Ohio Valley Wrestling. At that point, he was fighting under the name "Leviathan." He went undefeated in his early fights before losing against Kane and Steve Austin. He eventually won the OVW Heavyweight Championship before being promoted to WWE's main lineup.

It wasn't until 2002 that Bautista appeared in a televised WWE event. At this point, he changed his stage name to "Deacon Batista." In his early days, Bautista partnered with D-Von, winning many fights. Eventually, Bautista betrayed D-Von and a long feud ensued. In 2003, he joined Evolution alongside Ric Flair. Evolution would go on to become an extremely successful team, and they won many titles over the years. Eventually, the Evolution team became strained, as Triple H saw Bautista as a threat.

After turning on fellow members of the Evolution team, Bautista won the World Heavyweight Championship during WrestleMania 21. The event generated over 1.09 million PPV buys, a feat largely attributed to Bautista's appeal among fans. What followed was the longest-ever reign as World Heavyweight Champion at 282 days. Ultimately, a recurring issue with his triceps tearing forced him to vacate the championship.

In 2010, Dave Bautista had his one and only MMA fight against Vince Lucero. Bautista won by TKO in the first round.

Although his arm required surgery, he returned to WWE to fight for the championship once again. He won and lost the title a number of times in the years that followed, and he continued to struggle with arm injuries. However, he famously used this to his advantage when he used a fake arm vice to trick Randy Orton into letting his guard down. Although he continued to fight throughout the next few years, injuries were beginning to catch up with Bautista. After a match against John Cena, he legitimately compressed his L1 spine and later appeared in a wheelchair.

From 2013 onwards, Bautista started to get booed by fans. This led to a slow downfall which culminated in Bautista quitting the WWE. Although Bautista publically said that he quit because Triple H wouldn't give him a shot at the championship, the real reason for the split was because of "creative differences" behind closed doors. That being said, Bautista did eventually return to WWE in 2018, making a final appearance against Triple H, losing in 2019, and retiring permanently. 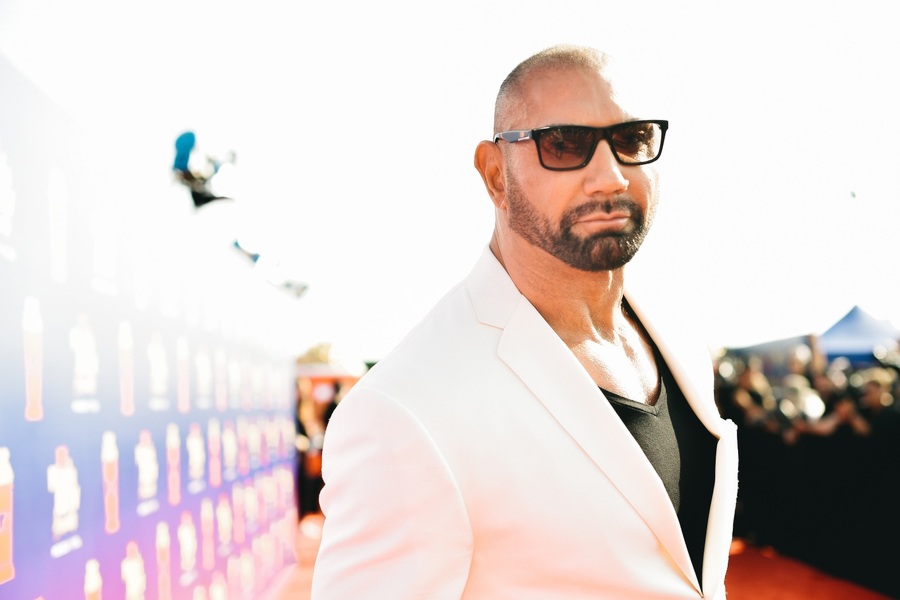 Dave Bautista has been an actor for many years. He appeared in the sixth season of Smallville and played an alien villain. In 2009, he had a short cameo in the Australian soap opera Neighbours. In 2010, he appeared in the action-comedy series Chuck. Over the next period, he appeared in films like Relative Strangers and Wrong Side of Town. Bautista continued to experience further success in the film world with the 2012 film The Man with the Iron Fists, and he was able to show off his martial arts skills.

Perhaps his biggest breakthrough in the film world came in 2014 with a major role in Guardians of the Galaxy. With this role, Dave Bautista showed off his acting abilities and forced Hollywood to take him seriously. He next appeared in the James Bond film Spectre in 2015, playing the villainous assassin Mr. Hinx. After teaming up with Georges St-Pierre in Kickboxer, Bautista made another notable film appearance in Blade Runner 2049, playing a replicant.

He then reprised his role as Drax in 2017's Guardians of the Galaxy Vol. 2. Having become part of the Marvel Cinematic Universe, Bautista also earned roles in Avengers: Infinity War and Avengers: Endgame. In 2019, it was announced that Bautista would be playing a major role in the upcoming film, Dune. In addition, Bautista has appeared in many other films and television series.

Dave Bautista first married in 1990, and the couple had two daughters together before divorcing in 1998. That year, he married his second wife. They had one son together before divorcing in 2006. In 2015, he married again, this time to a professional pole dancer, and then divorced her in 2019. In 2007, Bautista released an autobiography called Batista Unleashed in which he explains details from his wrestling career and his personal life.