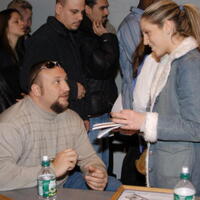 Bubba Ray Dudley net worth: Bubba Ray Dudley is an American professional wrestler and radio talk show host who has a net worth of $3 million. Bubba Ray Dudley was born in Queens, New York City, New York in July 1971. He is best known for being one half of The Dudley Boyz or Team 3D along with D-Von Dudley. He has also competed under the names Bully Ray and Brother Ray among others. Bubba Ray Dudley wrestled for Extreme Championship Wrestling from 1995 to 1999. He joined the WWE where he wrestled from 1999 to 2005. He then competed for Total Nonstop Action (TNA) Wrestling from 2005 to 2015 before returning to the WWE and the independent circuit. Dudley joined Ring of Honor in 2017. Bubba Ray Dudley is an 8 time WWF World Tag Team Champion with D-Von Dudley and has also held the WWE Tag Team Championship and WCW Tag Team Championship in addition to being a 10 time WWF/E Hardcore Champion. He was a two time TNA World Heavyweight Champion among other titles. Dudley was inducted into the TNA Hall of Fame in 2014 and the WWE Hall of Fame in 2018. He has also hosted a radio show for SiriusXM.