Bruno Sammartino Net Worth: Bruno Sammartino was an Italian-born American retired professional wrestler who had a net worth of $4 million at the time of his death in 2018. Bruno Leopoldo Francesco Sammartino was born on October 6, 1935, in Pizzoferrato, Italy. He was probably best known for being the longest-running champion of the World Wide Wrestling Federation (WWWF).

However, not only did he hold the title across two reigns for over 11 years (4040 days) in total, but he also had the longest single WWE Championship reign in professional wrestling history. It was in the post World War II period that Sammartino moved to the States and settled in Pittsburgh, Pennsylvania, where his father had already lived for several years. Even though small framed, Sammartino started devotedly to exercising at the local Young Men's Hebrew Association. Over time he grew to become one of the strongest men on the planet. Having set a world record in 1959 by bench-pressing 565 pounds, Sammartino caught the eye of wrestling promoter Vincent J. McMahon (the contemporary Vince McMahon's father) and was signed as a wrestler instantly. He became an overnight sensation. Bruno's legend continued to grow on May 17, 1963 when he defeated Buddy Rogers in just 48 seconds to become the WWWF Champion. When he lost the title in 1971, the audience was taken aback, but on December 10, 1973, Sammartino became the first two-time WWWF Champion, a title he held for an additional three-and-a-half years. Having retired in 1987, Bruno returned to WWE in the mid-80s as a broadcaster next to Vince McMahon JR and as a support system for his son David, who was just beginning his grappling career. The most popular American wrestler in the 1960s through the early 1980s, he later was known as The Living Legend. On April 6, 2013, he was inducted into the WWE Hall of Fame by his longtime friend, Arnold Schwarzenegger. 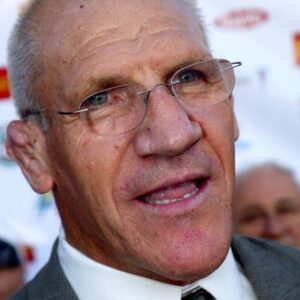