Bret Hart net worth and salary: Bret Hart is a retired professional wrestler, writer and actor who has a net worth of $7 million. Bret Hart earned his net worth through his years in the wrestling ring. He is also famous for writing a weekly column, autobiography and has made many appearances and roles on TV.

Hart was born in Calgary, Alberta, Canada in July 1957. Nicknamed "The Hitman", Bret Hart comes from a legendary wrestling family. His father Stu Hart was famous for The Dungeon, where he trained wrestlers in his basement. Bret Hart also goes by the monikers "The Excellence of Execution", and "The Best There Is, The Best There Was and The Best There Ever Will Be". He joined father Stu's Stampede Wrestling in 1976 and had his first match in 1978. In the WWF, Hart's first success came as a member of The Hart Foundation with brother-in-law Jim "The Anvil" Neidhart. Bret went on to become a very successful singles wrestler. After a controversial finish in what is known as the "Montreal Screwjob" Bret left for WCW in 1997. Hart retired in 2000 after suffering a concussion. He now appears sporadically in the WWE. The Hitman headlined three Wrestlemanias in his career. He has held the WWF Championship five times and the WCW Championship twice. Outside of wrestling Hart had a weekly column in the Calgary Sun from 1991 to 2004. He released an autobiography in 2007. He has appeared in TV shows The Simpsons, Lonesome Dove, The Adventures of Sinbad, and more. He is the founder and part owner of the Calgary Hitmen of the Western Hockey League. 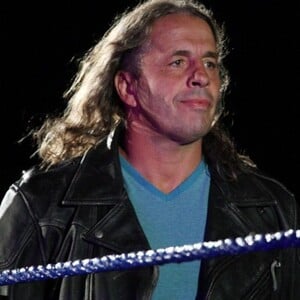