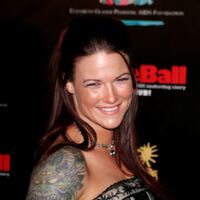 Lita net worth: Lita is a retired professional wrestler and WWE Diva who has a net worth of $4 million. She was born, Amy Christine Dumas on April 14, 1975 in Fort Lauderdale, Florida. She majored in Education at Georgia State University, but dropped out before graduating because she felt it was too much like high school. She went on to play bass guitar in several bands and worked as a roadie for a band for five years. She began taking judo classes and eventually went on to a career in wrestling. She signed with the World Wrestling Federation (now the WWE) in 1999 and throughout her career won the "WWE Women's Championship" four times. During her time with the WWE, she was often considered to be the most popular Diva in the company's history. She had an off-screen relationship with fellow wrestler, Matt Hardy, but it ended in 2005 when it came out that she was having an affair with Adam Copeland (Edge). The real life drama eventually found it's way into the WWE storyline, and although she and Hardy got back together after the feud, the couple officially broke up in later years. In 2006, after retiring from wrestling, she formed the punk band, The Luchagors. She also wrote an autobiography with Michael Krugman, called Lita: A Less Traveled R.O.A.D. – The Reality of Amy Dumas, which was published in 2003. It was featured on the New York Times bestsellers list and covered topics like her family, childhood, wrestling career, relationship with Matt Hardy, and her neck surgery. Dumas has appeared on several television shows including, Dark Angel, Fear Factor, The Weakest Link's WWF Superstars Edition, and an episode of the Headbangers Ball. She began hosting a radio show called Amy's Discordia in 2013, and was inducted into the WWE Hall of Fame on April 5, 2014. She is good friends with retired wrestler, Trish Stratus, and is the godmother of Stratus's son, Maximus.