Alberto Del Rio is a Mexican professional wrestler who has a net worth of $6 million. Alberto Del Rio has earned his net worth as a signed performer to the WWE Raw brand under the ring name of Alberto Del Rio. He is the current WWE Champion who is in his second reign as the champ, and he was recently the 2011 Royal Rumble winner who outlasted 39 other participants to win the largest Royal Rumble match ever, and 2011 Mr. Money in the Bank (Raw). He was born on May 25, 1977 in San Luis Potosi, the son of luchador Dos Caras. He grew up in a wrestling family and earned a degree in architecture from Universidad Autonoma de San Luis Potosí. He started his amateur wrestling career by training in Greco-Roman wrestling under trainers Leonel Kolesni and Juan Fernández. He did well enough to earn a place on the Mexican national team and while competing on the national team obtained several accomplishments. Caras ran in during an Asistencia Asesoria y Administration (AAA) show to save his father from a beat down from El Texano, Pirata Morgan and Espectro, Jr, thus making his professional debut. This incident took place on May 9, 2000 however he did not make his ring debut until September 29th that same year. He has worked in both of Mexico's main wrestling promotions and achieved success in Cdonsejo Mundial de Lucha Libre (CMLL), where he is a former World Heavyweight Champion. Del Rio was drafted from Smack Down to Raw on the April 25, 2011; he has always played a heroic character well-known for his finishing move the Cross Armbreaker. Throughout his wrestling career Rodriguez has been known by many ring names such as: Alberto Banderas, Alberto Del Rio, Dorado, Dos, Dos Caras, Dos Caras, Jr., El Dorado and El Hijo de Dos Caras. 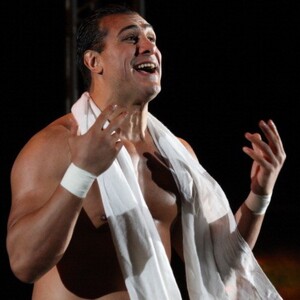