Virender Sehwag net worth: Virender Sehwag is an Indian cricket player who has a net worth of $40 million. Virender Sehwag affectionately known as Viru, or as he is often called the Zen master of modern cricket, is one of the ruling batsmen in the Indian cricket team. He was born on October 20th, 1978 in Delhi, India. No one has ever thought that a child of an Indian Jatt family will become the most destructive and aggressive right-handed opening batsman, as well as a part-time right-arm off-spin bowler on the cricket world scene. In 1999 Sehwag played his first One Day International, while two years later he became a member of the Indian Test cricket team. Slowly but surely, Sehwag turned into international cricket player, becoming the only Indian to be honored as the Wisden Leading Cricketer in the World for his outstanding performance in 2008. Subsequently, he became the first cricket player of any nationality to sustain the award for 2009. Out of the multiple records that Sehwag holds, one is the highest score made by an Indian in Test cricket (319), which was also the fastest triple century in cricket on international level, as well as the fastest 250 by any batsman ever. As for his innings of 309 and 293, they are labeled as the second and third best by any Indian player. Also, Sehwag is one of four batsmen in the world to have ever surpassed 300 twice in Test cricket and the only one who have ever scored two triple centuries and taken a five-wicket innings haul. He still holds the highest individual score in ODI cricket (219 off 149 balls) and so far remains the only cricketer in the world who have scored a double hundred in ODI and a triple hundred in Test Cricket. 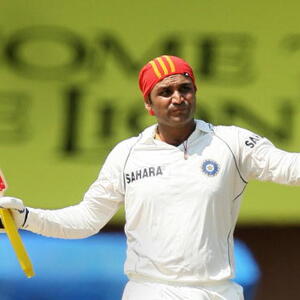