Virat Kohli net worth and salary: Virat Kohli is an Indian international cricketer, who has a net worth of $50 million. Virat Kohli has earned his net worth as a middle order batsman, who was the captain of the 3008 U/19 Cricket World Cup which took place in Malaysia. He was born on November 5, 1988 in Delhi.

He represents Delhi in first-class cricket, as a player for the Royal Challengers Bangalore, who is part of the Indian Premier League. He played for the West Delhi Cricket Academy where he made his One Day International (ODI) debut in 2008 as part of the Indian team who were the winners of the 2011 World Cup. His father Prem, was a lawyer who died in December of 2006, his personal life has been kept private. His last ODI appearance was on March 18, 2012 in a game against Pakistan. He was named the vice-captain of the ODI side in June of 2010. He played for the Tri-series against Sri Lanka and Zimbabwe which was held in Zimbabwe. His batting style is right hand bay and his bowling style is right arm medium, Kohli is an aggressive plays who bares his emotions loudly in public. He is a well-rounded mature player who was named as the best under-33 player in international cricket by Anil Kumble. Between June 2017 and June 2018, Virat Kohli earned $24 million between salary and endorsements. Of that total, $20 million was from endorsements. 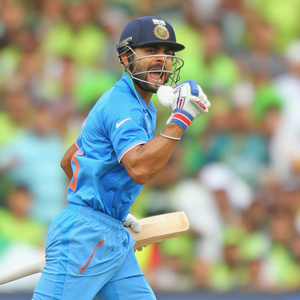