Tony McCoy Net Worth: Tony McCoy is a Northern Irish horse racing jockey who has a net worth of $30 million. Tony McCoy was born in Moneyglass, County Antrim, Northern Ireland in May 1974. In 2010 Tony was named BBC Sports Personality of the Year and became the first jockey to win the award. He was named the RTE Sports Person of the Year in 2013. At 17 years old McCoy got his first win in 1992. His 4,000th win came in November 2013. Every year that he has been professional Tony has been Champion Jockey. He won the Conditional Jump Jockey's Title in his first season riding in Britain. He won his first Champion Jockey title in the 1995-96 season and as of the 2013-14 season he has won 19 consecutive Champion Jockey titles which is a record. He has won high profile races such as the Cheltenham Gold Cup, Champion Hurdle, King George VI Chase, Queen Mother Champion Chase, and the 2010 Grand National. He is retained by J.P. McManus who offered him a $1 million pound a year retainer in 2004. McCoy was appointed MBE in 2003 and OBE in 2010. Tony was officially awarded three Guinness World Records in 2013 for most jump wins in a season, most Champion Jump Jockey titles, and most career jump winners. 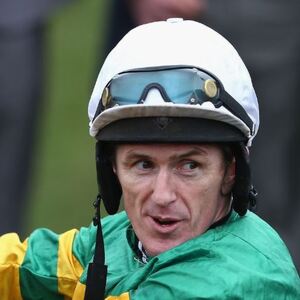