His father Chadidas ran a flourishing print business and was considered one of the richest men in the city. Sourav was introduced into the world of cricket by his elder brother Snehasiah, and Sourav has been regarded as one of India's most successful captains in modern times. He began his career by playing in state and school teams, and he is currently, the 5th highest run scorer in One Day Internationals (ODIs) and was the 5th person in history to cross the 10,000 run landmark. He is also only the 2nd Indian to cross that mark in ODIs, after Sachin Tendulkar, Wisden ranked him the sixth greatest one day international batsman of all time, next to Viv Richards, Sachin Tenukar, Brian Jara, Dean Jones, and Michael Bevan. Ganguly eloped with childhood sweetheart Dona Roy, even though both families were sworn enemies at that point and this news caused uproar between them. However, both families reconciled and a formal wedding was held in February 1997. Ganguly's dispute with Greg Chappell resulted in many headlines in September 2005, when Chappell became the coach for the India tour of Zimbabwe. Than in February 2008, Ganguly joined as the captain of Kolkata Riders (KKR) team, owned by Bollywood actor Shahrukh Khan, which was part of the Indian Premier League (IPL). Ganguly commented that he was inspired by David Gower, who was the first cricketer to attract Ganguly to the game. 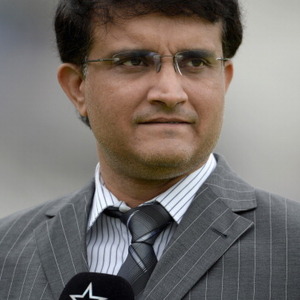