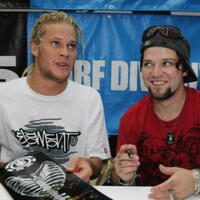 Tosh Townend Net Worth: Tosh Townend is an American professional skateboarder who has a net worth of $800 thousand. Tosh Townend is from Huntington Beach, California. Tosh is married to Nicole Townend and the couple had a daughter in March 2010. Tosh turned professional at 16 years old and was sponsored by Element at 11 years old and skated for that team until 2008. His father Peter Townend was surfing world champion in 1976. He let Tosh ride boards he had around the house and Tosh followed in his father's footsteps. He started surfing at seven years old in the National Scholastic Surfing Association and became NSSA Junior Middle School California Champion in 1996. He start to skateboard more and won the California Amateur Skateboard League in the 11 and under group as well as at 12 and 14 and under.