Stefan Janoski Net Worth: Stefan Janoski is an American professional skateboarder, writer, artist, and musician who has a net worth of $20 million. Stefan Janoski was born in July 1979 and his hometown is Vacaville, California. He is well known for his signature Nike SB shoe model Nike Zoom Stefan Janoski. Stefan started skateboarding in 1992. He appeared in the video Alone and was sponsored by Expedition One skateboard deck company. He joined the Habitat skateboard team and skated with Tim O'Connor often. Janoski participates in and supports the Tampa Pro skateboard contest. He joined the Nike Skateboarding (SB) brand in 2002 and was able to design his own signature shoe. He has said that Nike originally resisted his ideas but he would not compromise. In 2013 he became a member of Asphalt Yacht Club, the Steve Williams clothing company. Janoski is also sponsored by Official Crown of Lauren, Venture Trucks, Mob Grip, Bones Bearings, and Glassy. His art was part of the Voyages exhibition in Encinitas, California in 2013 and the show featured his bronze and ceramic sculptures. Stefan is known for his switch-stance skills and his casual style in skateboarding. 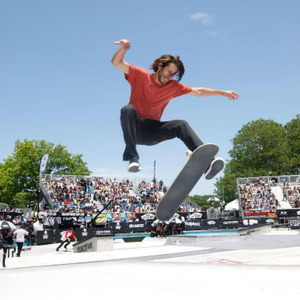