Jamie Thomas Net Worth: Jamie Thomas is an American professional skateboarder and entrepreneur who has a net worth of $50 million. Aside from establishing himself as a dexterous skateboarder, he is the owner and president of Black Box Distribution, a company that offers customers such brands as Zero Skateboards and Fallen Footwear.

Born in Dothan, Alabama on 11th October 1974, he made his beginnings in skateboarding at the age of eleven. Having recognized the sport as his true calling, Thomas moved to the West Coast of the States to pursue skateboarding. The first sponsorship that he received was by Thunder trucks in 1992 when he got Real Skateboards and Spitfire wheels under the Deluxe Distribution company. It was while he was living in San Francisco that he turned pro and started riding for skateboard deck brands. In 1994 he decided to relocate in Southern California, where he filmed video sections for Spitfire and Invisible. One year later, he left Invisible to join Toy Machine, for which he filmed two videos one of which was "Welcome To Hell". Since, he has never ceased to make films that comprise discography of over twenty flicks. It was in 1996 that he set up a small clothing company through Toy Machine's distributor Tum Yeto. Later on, the company got renamed Zero Skateboards. Today, Thomas owns another company, Black Box Distribution, which was established in 2000 and serves as a parent company of Mystery Skateboards, $lave Skateboards, Zero Skateboards, Threat By Zero, Insight Clothing, and Fallen Footwear. Jamie Thomas has been playing his role of entrepreneur so well that he received a regional "Entrepreneur of the Year" award from Ernst & Young in 2006. 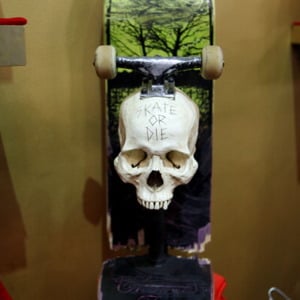