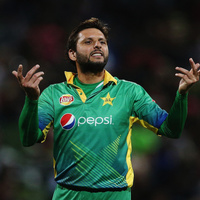 Shahid Afridi Net Worth: Shahid Afridi is a Pakistani cricketer who has a net worth of $30 million. Born Sahibzada Mohammad Shahid Khan Afridi on March 1, 1980, in Khyber Agency, FATA, Pakistan, he is best known for his aggressive batting style. Shahid Afridi burst on to the cricket scene in 1996, when he was selected for his leg spin bowling. He made history by scoring fastest, record-setting ODI hundred in his first innings. This remarkable feat turned 16-year-old Afridi into a super star overnight. After a while, he signed to play for Sydney Thunder in Australia's Twenty20 Big Bash league. It was in June 2009, when Afridi robbed Younus Khan of the Twenty20 captaincy, and was subsequently appointed ODI captain for the 2010 Asia Cup. During his first match as ODI captain, Afridi scored a century but Pakistan still lost to Sri Lanka by 16 runs. Shortly after, Afridi seized the Test captaincy, making his debut on 22 October 1998 against Australia. But he resigned after one match in charge due to lack of form and ability to play Test cricket, and also announced his retirement from Tests. However, he managed to regain the captaincy in limited-overs form of the game and led the team in the 2011 World Cup. All in all, Afridi is an avid cricketer who has played 27 Tests, 350 One Day Internationals and 59 Twenty20 Internationals (T20Is) for the Pakistani national team.