Yannick Noah Net Worth: Yannick Noah is a French former professional tennis player and pop music star who has a net worth of $10 million dollars. Born May 18, 1960 in Sedan, France, he is known as the dreadlocked tennis champion who claimed the 1983 French Open title in his native France, as well as a pop music star.

The son of famed footballer Zacharie Noah, he spent much of his childhood in his father's native Cameroon. Despite his affection for Jimi Hendrix and Bob Marley, Noah chose to pursue sports over music, proving especially gifted as a tennis player and eventually capturing the attention of American tennis legend Arthur Ashe, who in 1971 installed him in Nice's French Tennis Federation development program. Upon turning professional in 1977, it took Noah just a year to claim his first singles title in Manila. A flamboyant player renowned for his blistering forehand, he left his mark in 1983 when he defeated reigning champion Mats Wilander to become the first Frenchman in 37 years to win the French Open. His tennis career spanned two decades and in 2005 he was inducted into the International Tennis Hall of Fame. After retiring from tennis, Noah began his recording career in 1990 with the single Saga Africa. In 1991, he released his first LP, Black et What, which featured lyrics in French, English and Cameroonian and featured guest contributions from Manu Dibango and Idrissa Diop. The album proved to be a huge commercial disappointment. Only in 2000 did Noah finally issue his third LP, a self-titled effort infused with the music and culture of his African heritage. Dubbed Afro-reggae by the singer himself, his new sound revitalized his chart stature and the single Les Lionnes rocketed to number one. Its half-live/half-studio follow-up, Métisse(s), highlighted by a duet with reggae icon Jimmy Cliff, came about two years later. His son is professional basketball player Joakim Noah. 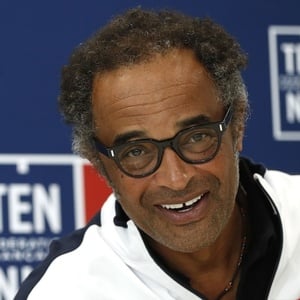