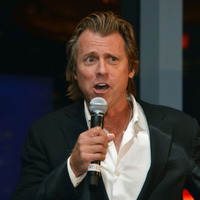 Vincent Van Patten net worth: Vincent Van Patten is an American actor and former professional tennis player who has a net worth of $2 million dollars. Vincent Van Patten was born in Bellerose, New York, and grew up in a showbiz family. He began acting as a child, appearing in the television film, Dial Hot Line. From there, he went on to steady work in both film and television works, appearing in projects like Ironside, The Bill Cosby Show, Bonanza, The New Scooby Doo Movies, Medical Center, Gunsmoke, Apple's Way, Three for the Road, Wonder Woman, Baywatch, and The Young and the Restless. In addition to acting, he was also a successful tour tennis player, and was the 1979 Association of Tennis Professionals Rookie of the Year. He reached 26th in the world in the early 80s. He is also an avid and successful poker player, he hosted the broadcast of the "World Poker Tour" for nine years. Vince is related to several other well-known actors, actresses, and singers through blood and by marriage. Vince is brother of James Van Patten and Nels Van Patten, nephew of actress Joyce Van Patten, nephew of Timothy Van Patten, and cousin of actress Talia Balsam. From his first marriage to Betsy Russell he has two sons: Richard and Vince. In his current marriage to Days of our Lives actress Eileen Davidson; they have one child. In 2014, the family also announced that Davidson would be joining the cast of The Real Housewives of Beverly Hills, which will bring cameras into their lives and follow the couple through their daily routines.