His biggest career win was the 2005 Paris Masters as an unseeded player. Berdych is one of the few active players who has reached the semifinals of all four Grand Slams. He made the semifinals of the 2010 French Open, the 2012 US Open, and the 2014 and 2015 Australian Opens. Berdych turned pro in 2002 and has won over $20 million in career prize money including 10 career titles. His highest ranking was #5 in August 2013. Berdych also reached the quarterfinals of the Olympic Games in 2004. As a doubles player he was won two career titles and reached the quarterfinals of the 2005 Australian Open. Representing Czechoslovakia he has also won the Hopman Cup in 2012 and the Davis Cup in 2012 and 2013. Berdych played the longest ATP doubles match ever at 7 hours and 2 minutes at the 2013 Davis Cup. 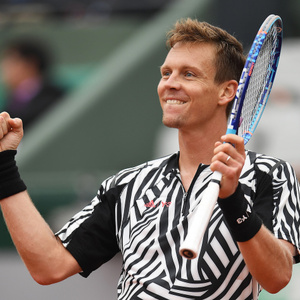