How much is Tim Henman Worth?

Tim Henman net worth: Tim Henman is a retired English professional tennis player who has a net worth of $20 million dollars. Tim Henman was born in Oxford, England, and grew up in a family of tennis players. His great-grandmother was the first woman to serve overarm at Wimbledon back in 1901. Everyone in his family played tennis, and he began playing as soon as he could walk. When he was eleven, he joined the "Slater Squad", a group of young English tennis kids who showed great potential. He had to take time off after being diagnosed with a bone disease, but was able to return two years later. He began playing on the junior circuit in 1991, when he was 17. He was initially unsuccessful, though he performed better in doubles matches. By the middle of 1992, however, he'd hit his stride and was playing better than ever. He grew six inches in early 1993, and moved into professional senior level play, as well. He quickly rose up the ranks, and by 1996, he was in the Top 30 in the world. He cracked the Top 10 in 2001. In Grand Slam play, he went on to reach the fourth round of the Australia Open in 2000, 2001, and 2002, as well as reaching the semi-finals multiple times at the French Open, the US Open, and Wimbledon. He retired in 2007. 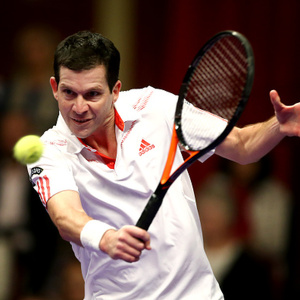