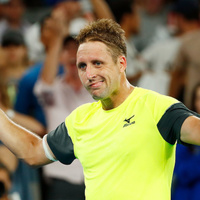 Tennys Sandgren net worth: Tennys Sandgren is an American professional tennis player who has a net worth of $3 million. He is most well known for reaching the quarterfinals of the Australian Open in 2018 and 2019.

Tennys Sandgren was born in Gallatin, Tennessee in July 1991. He was named after his Swedish great grandfather. Sandgren turned professional in 2011 and is coached by Carsten Ball. He has won more than $2 million in career prize money. Tennys Sandgren achieved his highest singles ranking of #41 in January 2019. He won the 2019 Auckland Open in New Zealand. Tennys Sandgren reached the 4th round of Wimbledon in 2019 and the third round of the US Open in the same year. He competed in the French Open starting in 2017. He has also competed in doubles, achieving his highest ranking of #115 in January 2014. He reached the quarterfinals of the US Open in 2018. Sandgren played at the University of Tennessee before going pro.