What is Stefan Edberg's Net Worth?

Stefan Edberg is a Swedish retired professional tennis player who has a net worth of $25 million. Stefan Edberg won six Grand Slam singles titles and three men's doubles titles between 1985 and 1996. Additionally, he won the Masters Grand Prix and four Championship Series titles. Edberg is notable for being one of only two male players in the Open Era to have earned a world No. 1 ranking in both singles and doubles.

He was a part of the Swedish Davis Cup team that won four times. Edberg won four Masters Series titles and was a Masters Grand Prix champion. He also won four Championship Series titles. He won the 1984 Olympic tournament, although it was unofficial. Edberg was ranked in the top 10 in singles competition for 10 years in a row and spent nine consecutive years in the top 5. He won the Australian Open, Wimbledon, and US Open twice, and a Bronze Medal in the 1988 Seoul Olympics. As a doubles player he won the Australian open twice, the US Open, and a Bronze Medal in 1988.

In 2005 he was inducted into the International Tennis Hall of Fame.

In 2014 he started coaching Roger Federer.

During his career Stefan won over $20 million in prize money. He earned millions more from endorsements.

Stefan Edberg was born on January 19, 1966 in Västervik, Sweden. He first gained recognition in the tennis world as a junior player, winning all four Grand Slam junior titles in 1983. In the process, Edberg became the first and only player to achieve the Junior Grand Slam.

Professional Playing in the 80s

In 1983, following his huge Junior Grand Slam accomplishment, Edberg went professional. He won his first career doubles title shortly after in Basel. The same year, at the US Open, he accidentally precipitated the death of linesman Dick Wertheim when he made an errant serve. In 1984, Edberg notched his first top-level singles title in Milan, and won the unofficial tennis tournament, which was that year an exhibition event, at the Summer Olympics in Los Angeles. He also partnered with his fellow countryman Anders Järryd to make it to the final of the US Open.

Edberg began to become well known in the United States in early 1985, when he won the Indoor in Memphis competition over Yannick Noah. Subsequently, he won his first two Grand Slam singles titles at the Australian Open. In 1986, Edberg re-teamed with his professional partner Anders Järryd for the French Open doubles competition; the two ended up making it to the final. The next year, Edberg defended his Australian Open title by defeating Pat Cash in five sets, making his win the last one to be held on grass courts in that particular tournament. In addition, he won the men's doubles titles at both the Australian and US Opens, once again with partner Anders Järryd. Edberg continued his success in 1988, reaching the Wimbledon final against German player Boris Becker, marking the first of three consecutive Wimbledon finals against Becker. Edberg reached the French Open final in 1989, but lost to the 17-year-old Michael Chang. 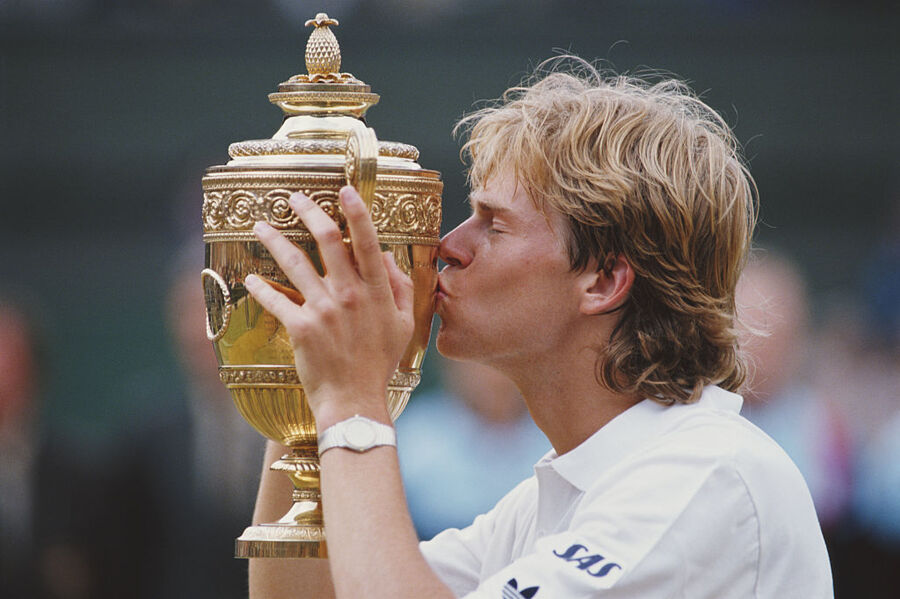 Professional Playing in the 90s and Retirement

Edberg had a bit of a setback in 1990, as an abdominal muscle injury forced him to withdraw from the Australian Open final in the third set. However, he bounced back not long after this by winning the Super 9 tournament in Cincinnati, giving him back his world No. 1 ranking. Edberg held on to that ranking for the remainder of the year, as well as for much of the subsequent two years; all in all, he spent 72 weeks as world No. 1. Meanwhile, he notched his final two Grand Slam singles titles at the US Open, first over Jim Courier in 1991 and then over Pete Sampras in 1992.

In both 1992 and 1993, Edberg made it to the finals of the Australian Open; however, he lost both times to Jim Courier. His appearance at the 1993 Australian Open would be his final at a Grand Slam singles tournament. Later, in 1996, Edberg won his third and final Grand Slam doubles title in Australia, this time with Petr Korda. He retired later that year. Edberg finished his professional tennis playing career with six Grand Slam singles titles, three Grand Slam men's doubles titles, four Masters Series titles, and four Championship Series titles.

Although he won the tennis tournament at the 1984 Summer Olympics in Los Angeles, Edberg did not receive a medal due to the tournament being held as an exhibition event. When the tournament became a medal event again in 1988 in Seoul, Edberg won bronze in both the men's singles and doubles competitions.

Edberg is regarded as one of the top serve-and-volley players in modern tennis history. He was often noted for using less powerful serves, such as kick and slice serves, that allowed him more time to travel to the net. Additionally, Edberg was skilled with his footwork as well as his groundstrokes, and had a particularly strong backhand. 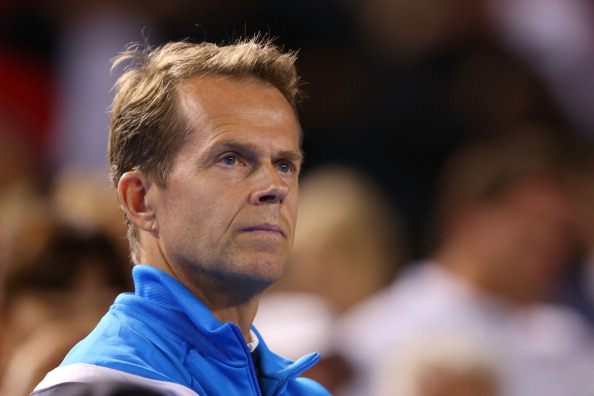 In late 2013, Edberg signed a contract to coach Swiss professional tennis player Roger Federer. The collaboration effectively began at the 2014 Australian Open, where Edberg began to facilitate the Swiss star's gradual career resurgence. The collaboration between the men eventually came to an end in late 2015.

With his wife Annette Hjort Olsen, Edberg has two children named Emilie and Christopher. He is an avid fan of the ice hockey team Växjö Lakers, from his native Sweden, as well as the English football team Leeds United.