Robby Ginepri net worth: Robby Ginepri is an American professional tennis player who has a net worth of $2 million. Robby Ginepri was born in Fort Lauderdale, Florida in October 1982. His breakout year came in 2005 when he reached the semifinals of the ATP Masters Series before losing to #1 Roger Federer. He lost to Andre Agassi in the semifinals of the US Open and became the first player in the open era to play four consecutive five-set matches at the event.

In 2005 Robby won the inaugural Superset Tennis tournament and won $250,000. He finished the year at #15 in the ATP Rankings. His play did not sustain in 2006 and 2007. He made his Olympic tennis debut in the 2008 Olympic Games in Beijing but lost in the first round. He also debuted for the Washington Kastles of the World Team Tennis league. In 2010 he was in a biking accident and had surgery on his arm that caused him to miss some time. He has won three career titles and has earned almost $4 million in prize money. Robby owns the Olde Town Athletic Club in Marietta, Georgia. In 2007 he participated on Spike TV's Pros vs. Joes. Robby married Josephine Stafford in 2012. 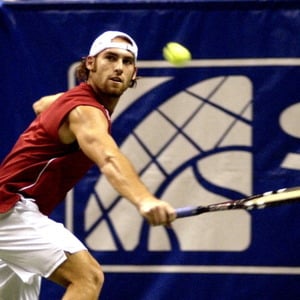