Pedro Sousa net worth: Pedro Sousa is a Portuguese professional tennis player who has a net worth of $1 million. Pedro Sousa was born in Liston, Portugal in May 1988. He is right handed with a  two handed backhand and is coached by Rui Machado. Sousa turned professional in 2007 and has won more than $500 thousand in prize money.

In 2019 he cracked the Top 100, being ranked at #99. Pedro Sousa has competed in the US Open in 2012, 2014, 2015, 2016, 2017, and 2019. He also competed in the French Open in 2012, Wimbledon in 2017, and the Australian Open in 2019. Pedro Sousa has defeated players including Alessandra Giannessi, Guilherme Clezar, Marco Cecchinato, Casper Ruud, Jan-Lennard Struff, Kimmer Coppejans, and Peda Krstin. As a double player Sousa has partnered with the likes of Gastao Elias, Tiago Godinho, Christian Lindell, Goncalo Falcao, Alejandro Gonzalez, Franko Skugor, and Frederico Gil. 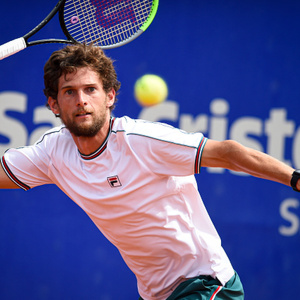