Pam Shriver Net Worth: Pam Shriver is an American retired professional tennis player who has a net worth of $10 million. Pam Shriver was born in Baltimore, Maryland in July 1962. She reached the women's singles final at the 1978 US Open as a 16 year old amateur. Her first career singles title came in 1978.

Shriver turned professional in 1979. During her tennis career she won nearly $5.5 million in prize money. She won 21 career singles titles and was ranked as high as #3 in the world in February 1984. She reached the semifinals of the Australian Open and Wimbledon three times each. As a doubles player she won 112 career titles and was ranked #1 in the world in March 1985. Pam won the Australian Open seven times, from 1982 to 1985 and from 1987 to 1989. She also won the French Open four times, Wimbledon five times, and the US Open five times. She also won the 1987 French Open Mixed Doubles title. Shriver also competed internationally for the United States. She won a Gold medal in doubles at the 1988 Seoul Olympic Games. She also won three Gold medals at the 1991 Havana Pan American Games for singles, women's doubles, and mixed doubles. Shriver retired in 1997 and was inducted into the International Tennis Hall of Fame in 2002. She currently works as a tennis broadcaster for ESPN. 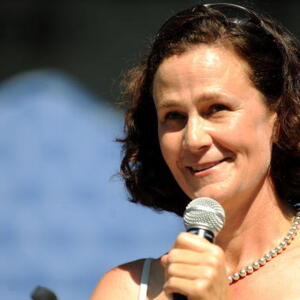