Nick Kyrgios net worth: Nick Kyrgios is an Australian professional tennis player who has a net worth of $8 million. Nick Kyrgios was born in Canberra, ACT, Australia in April 1995. He is right handed with a two-handed backhand. Kyrgios turned pro in 2013 and has earned more than $7 million in prize money.

His highest singles ranking was #13 in October 2016. Kyrgios has reached the quarterfinals of the Australian Open in 2015 and Wimbledon in 2014. He has reached the third round of the French Open in 2015 and 2016 and the third round of the US Open in 2014, 2016, and 2018. During his junior career he won the boys' singles event at the 2013 Australian Open as well as the boys' doubles event at the 2013 Wimbledon Championships. He became the third player to defeat Roger Federal, Rafael Nadal, and Novak Djokovic in their first matchups. Nick Kyrgios has developed a bad reputation and been accused of unsportsmanlike conduct, verbal abuse, and "tanking" by the media and former players including John McEnroe. 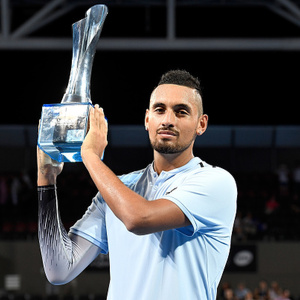